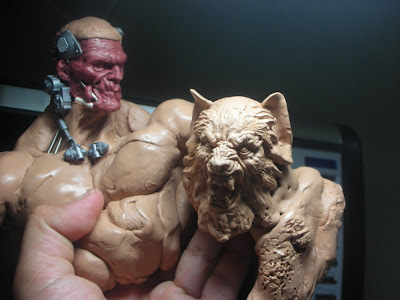 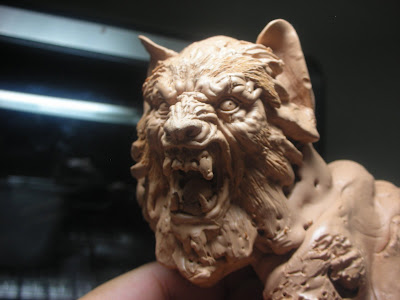 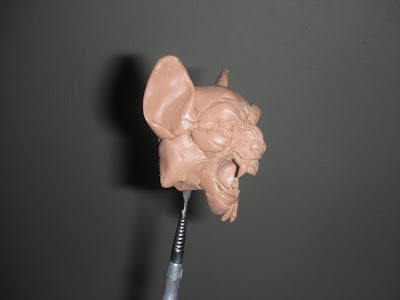 Hi guys this is a part of my revamped classic monsters kit line.
Here's some WIP.... been itching to work on this kit line and other creatures, but I do not have time :(
So I did this in a couple of hours... not happy with it yet, but tomorrow I will see what it is I do not like, and will refine accordingly.... and no I am not bragging about the time it took to build, it is actually very easy with Zen wax :wink:
Thanks for looking,
-Erick
Posted by ERICK SOSA at 2:32 AM 1 comment:


Hi guys,
First I must apologize, for taking so long to update the blog.
I just wanted to show you some things I have been working on.
Not much to show, but hopefully this guy will be done soon, I am also working on a very extended line of revamped universal monsters, and even some original creatures, that will be part of a story that I am developing just for fun, please forgive my weakness in writing, it is not my forte, but I sure did enjoy writing this little story, as I always asked myself, what would happen if the roles of Dracula and Van Helsing were reversed, what would trigger such event, and thus this idea was born.
Thank you for reading,
-Erick
Done in Zen wax by Willow products.
And here's his back story:

Not much is known publicly about this new version of Frankenstein, all that is known and should remain known is that he is a revamped version of the old prototype, created by Viktor Frankenstein lead Scientist of the synthetic soldier program of 2009, assisted by Katrina and myself .
A formidable biomechanical beast, bulletproof, fire proof, with super strength, with an I.Q. of 230, with a heart of a child... General DraKula's child... sadly all that is left from the child is a mere skewed reflection of the one child General Drakula fathered with mortal scientist Kathrina Van Helsing chief assistant to Doctor Frankenstein.
His heart saved by science thanks to his mother, and imbued with power from the beyond due to his father's highly complex, yet powerful DNA ..... the once feared Drakula...
This new version of Frankenstein possesses none of the weaknesses his predecessor seemed to display, with all his senses enhanced he is a powerhouse fighting for our nation's freedom. His vampire gene is in a dormant state due to DNA manipulation, hence; he is not a Vampire in the strict sense of the word.
end of transmission.
-Erick Sosa
Assistant to Katrina Van Helsing Department of home land security.
U.S. N.S.A Report
10-13- 2050

The creature always ready to help the now reformed DraKula in the on going battle against the now corrupted Van Helsing.
the first in an army of creatures of the night specifically engineered by Drakula himself and built by Victor Frankenstein to protect a world devastated by the self proclaimed Lord Van Helsing, a former hero, a now corrupted being with extreme hatred for anything living... or undead....yet using his undead minions carry out his evil and twisted will.

It is rumored Van Helsing out of spite after realizing his own daughter had fallen in love with the evil Drakula, and that they had secretly married in a a bow to become eternal companions, it is rumored Van Helsing tried to kill them both, but after realizing that even Drakula had been transformed by true love, and had become a noble husband and father, and a shadow of his former self, Van Helsing went mad, not believing Drakula's choice to become good, but in reality Van Helsing realized he no longer had a purpose to continue his existence, and out of spite, and in a turn of events, killed his own grandson, by decapitating him, as to him the child represented an unholy union between man ( God's greatest creation) and and evil .
In a fit of rage Drakula wounded Van Helsing with his fangs, not without Van Helsing piercing DraKula's heart with an alien like silver sword, while he selfishly and fruitlessly tried to protect his wife from the powerful blow.....leaving them both mortally wounded.... they survived thanks to the care of Doctor Victor Frankenstein, but this came at a great price as Drakula was stripped from all his powers except his immortality, it seems the sword he had been wounded with contained a trace metal , same metal that was found in the molecular composition of the Roswell Metamoona alien space craft incident. Wether the metamoona aliens were involved in the forging of such a weapon is not yet known.
Capable of turning the undead into vulnerable human beings, nearly over 3 centuries later, with the aid of scientific advancements Frankenstein's experiments proved fruitful as he was able to override the effects caused by the sword, thus endowing Drakula with even greater abilities than before specially allowing him to control his thirst by sheer will, and feeding on UV rays... (his only known weakness is over exposure to darkness/ more than 3 days in a row without UV rays) and allowing him to become a day walker, this led to his proselyting among humans and even convincing of a great majority of undead and anomallies alike to accept a better life in the bast underground city of new Los Angeles built under the UNDREGROUND TREATIE of 2001
After offering his services to the U.S. Government in order to establish the UNDERGROUND TREATIE of 2001 Vladimir Tepesh and his scientific team were offered protection and were made head of the Project Synthetic soldier of 2009 , in order to create a core group of enhanced soldiers out of willing undead beings, and anomalies ( werewolves, mutants, aliens) that were eager to protect the world from the Van Helsing organization, and their minions, in order to protect both their kind and humans beings.


CURE:
The cure created by Victor Frankesntein in 1976, was approved by the U.S. Government under President Barak Obama to be used on all of the undead that willingly have decided to live in Communion with each other in a peaceful underground city developed by the U.N. as a haven for all the undead, werewolves, yeti, skin walkers, and any genetic anomaly, that willingly chooses to leave their aggressive behaviors behind, in exchange for peace and freedom.


Lord Van Helsing on the other hand escaped after his attack to the Drakula family , eventually healing from his wound, and swearing that he would destroy the one that caused this great pain and turned him into what he hated most.... a monster! He promised himself that he would not allow Drakula's curse to take over him.
But as decades went by Van Helsing kept to himself, inside his laboratory, trying to find a cure. slowly giving into the thirst... first he would feed with the blood of cattle, and when science allowed , he used synthetic blood, but as time went by his urge for human blood outgrew his will and desire to be cured, eventually rendering him at the mercy of the twisted need to feed from human blood.
Realizing that he had become his worst nightmare he set out to destroy his own daughter, fueled by her so called betrayal to him and to God himself.
In his twisted mind he seeked to redeem himself by destroying all life as we know it.
Truly van Helsing had become more evil than Drakula had ever been, as he thought -like all evil despots from the past- that he was carrying out heaven's will in destroying and torturing all lesser beings in his " righteous" path... purifying them from their own so called demons.
This witch hunt was not limited to men women, and children, but even animals, and of course the undead. As he's discovered that the U.S has become and Allie and even recruited Drakula as one of their generals , his rage is now also focused in destroying our nation.


The evil self proclaimed Lord, used all of his fortune, gathering the best in the scientific community to achieve his "noble" purpose throughout the decades.... he's established the van Helsing Organization.
Now, he's dedicated to torturing humans, with evil experiments, merging humans and anomalies with machines, ultimately engineering his own soldiers of the undead, in order to create a grand army, of biomechanical beasts, powerful enough to assist in getting rid of anything related to his former daughter ( humans) and any remnants of the great Drakula..the undead. He is been connected to many terrorist acts throughout the world, and he must be stopped. Whether the Metamoona mutant race is involved in providing Van Helsing with technological advancements, it is not a established fact yet, but many investigations have led us to believe that Van Helsing is indeed working with advanced alien technology.
Year 2050:
He walks the earth with his his genetically brainwashed minions such as the Phantom, Jekyll, Yeti, Bigfoot, and , Igor... among others.
These creatures are powerful warriors, all engineered to bring down Dracula and his own army of night walkers. A new war is brewing, a war as that as far as humans know it is a war of evil VS evil.

This time Evil will fight for good! 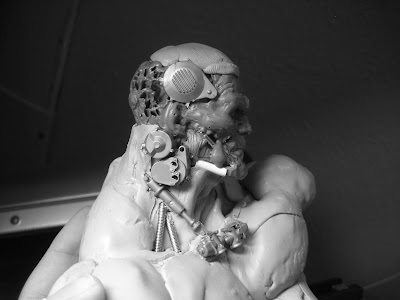 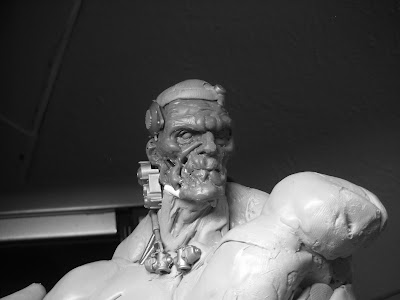 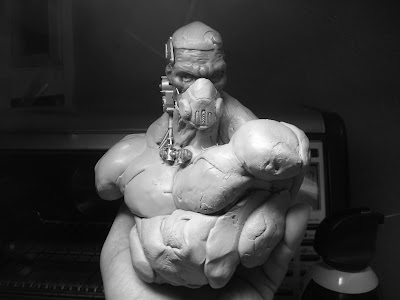